Sound editing and design is the process of creating the final audio track for the film. From the beginning of sound, filmmakers have strived to improve the audio track and increase the experience of the viewer. For a greater experience of the audio track, the addition or manipulation of sound elements is necessary in most cases. We divide them into four basic groups: dialogue, effects, atmosphere and music. Each of them serves as a tool for creation. Sound editing and design usually consist of several separate handling processes. The number of processes depends on the complexity of each individual project. These processes are:

Looping session – ADR is a process in which certain parts of a dialogue are recorded again in a studio. We carry out this process, for example, when the production sound contains background noise that is too loud and the understandability of the dialogue is questionable. ADR can also be used when we want to replace a badly pronounced word or reply. We can correct an actor’s interpretation as well. The dialogue editor and the director decide which parts of the dialogue need to be recorded again.

Composing and recording music is the process of adding music to the film. The music in a film can be divided into the music of a scene and film music. The music of a scene comes from the space where the scene is happening: from a radio, television, speaker, etc. Film music is separate from the scene and adds dramaturgy to the film. The composer, or in some cases the music editor, is usually responsible for the composed music in a film. The music editor is in charge of the film music in cases when it has already been written or comes from music libraries.

Sound mixing is the process of adjusting the relations between individual sound elements, i.e.: dialogue, ADR, effects, synchronised sounds and music. Sound mixing is done in special studios, which are built especially for this purpose. What makes them specialised is their size and equipment, which is similar to the average cinema. With that, a concrete transformation of the audio track from the mixing studio to the distribution environment can be achieved. If the film won’t be screened in cinemas, we can use smaller or regular studios for sound mixing.

After the picture is locked, the process of sound editing and design can actually begin. First, it’s necessary to transfer the video and audio material from the video editing department. Before the transfer, it’s necessary to adjust the technical details of the transfer and to find the most appropriate video and audio format for transfer. There are many video formats and it’s best to choose the format which is approved by the sound department. For the sound transfer, the main formats are OMF and AAF. The use of each depends on the video and audio editing program. Each format has its advantages and disadvantages, for this reason it would be good to make a short test first. We transfer a short segment of the film and check it. Checking the whole film would take too much time. While checking the segment, we must pay attention to the synchronisation of the sound, the number of sound tracks and the sound recording. We must also check if the information about the sound recording was preserved during the transfer. This information is also called metadata, and it’s written in all the source files of the sound that was recorded on location. Metadata includes all the necessary information about the filmed shot, i.e.: the day, hour, time code, scene, shot, frame rate, etc. The person recording the sound must also hand in the report. The metadata and the report from the shooting will help us search for the recorded atmospheres, effects, dialogues, etc. We must pay special attention to the synchronisation sound, called a sync beep or plop. This is a sound with a length of exactly one frame, which is in most cases shaped like a sine wave and has a frequency of 1 kHz. This sound is usually placed 48 frames before the first frame of the film, even if there’s only a black screen. It’s very important that this sound be clearly marked, especially in the picture. During the process of further handling, it will serve to synchronise the sound with the picture. In cases where the film begins with a fade in, the frame before the first film frame is also additionally marked in the picture.

When everything is successfully transferred and checked, the person responsible for the editing and sound design (the sound designer) and the film director examine the film. They find and mark the parts where the dialogue needs to be changed, or the addition of effects, synchronised sounds or music is necessary, etc.

The sound designer first estimates the amount of work that is necessary. According to this estimate, a financial and time plan are given to the film production. When plans are coordinated with the production, the work can begin. The sound designer divides the work among the individual departments, which are divided similarly to the sound handling processes. One person, who is also the sound designer, can handle smaller and less demanding projects. Bigger and more complex projects need as much as 20 people or more.

The process always begins with the dialogue editing. In most films, this is the most important part of the sound and it demands special attention and handling. The dialogue must be understandable and as clear as possible. The editing of sound effects and the recording of synchronised sounds begin almost at the same time as the dialogue editing. The film director and sound designer regularly examine the work that has already been done and send their corrections to the departments. After the editing is finished, the work of the individual departments is assembled into a whole, examined and prepared for sound mixing.

Sound mixing usually runs in stages. The individual stages are called pre-mixes. First we pre-mix the dialogue, then the synchronised sounds, followed by the sound effects and atmospheres and finally the music. In the end, all stages are assembled into the final mix. Mixing in stages is usual and necessary with bigger projects. With smaller projects, it’s possible to do everything in one stage.  After the mix is finished, distributional versions of the mixed sound must be made. Each medium has its own features and technical characteristics. A sound that has been mixed for cinema screenings isn’t used for television and inversely. The process of adjusting the sound is also called mastering. For example: we mixed the film with multiple channels for the needs of cinema screenings, which are very dynamic and written in multichannel format. For the needs of television, it is necessary to make a less dynamic and two-channel (stereo) version.

Example of a computer program for sound design 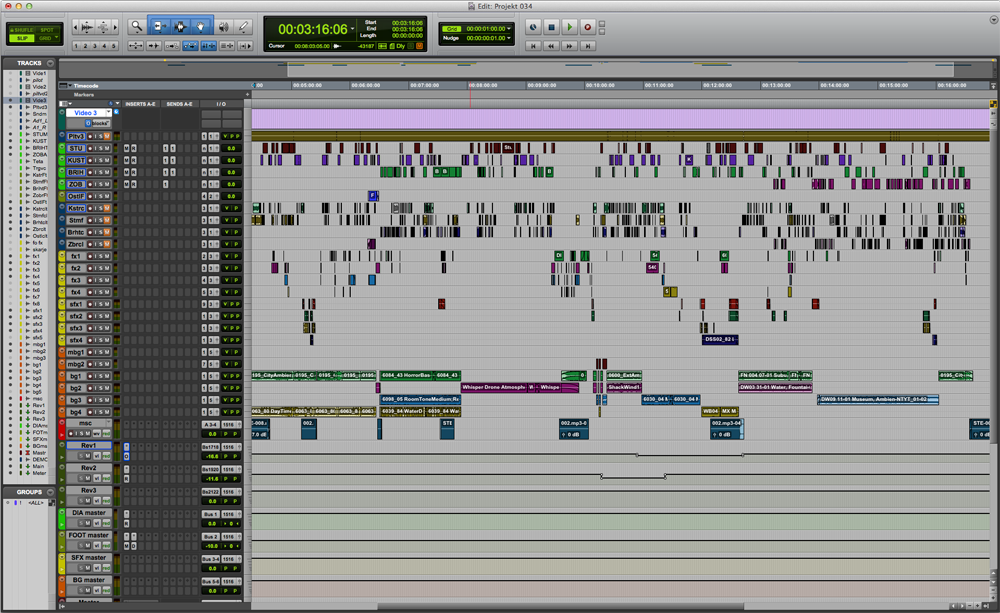