In the history of film, the era of sound film is considered to have began in 1927 with the first sound film The Jazz Singer. However, the era of silent film was never really silent; since the beginning of film, projections had been accompanied by music. Primarily out of artistic but also practical reasons; in the initial period of film, viewers were very loud at film screenings..

For now, we will concentrate on the chapter about sound recording. Sound can be divided into two categories: diegetic and non-diegetic. Diegetic sounds have their source in the image, or if we simplify, these are the sounds that our characters hear. Sounds in this category are: dialogue, atmosphere, sound effects (Foley) and music (if its source is in the image).

Dialogue is a conversation between two or more people. In dramatic scenes, it is the basic element of sound. Regarding its production, it’s the cheapest but also the least specific film solution. Dialogue brought a more natural style of acting in films, as actors no longer needed to show certain actions with movements (which were mostly exaggerated). Dialogue is also used for role characterisation, since actors can additionally portray the personal characteristics of film characters using the voice intensity, accent, way of pronunciation

To get a quality recording of the dialogue, it’s important to isolate it as much as possible in the given filming conditions. We can do much for a good recording with precautionary thinking. If we can choose the filming location, we pick a location without any disruptive factors that could affect the sound recording. For example: close to a road, stream or river, noise from ventilators or electronic devices, near the airport, etc. The incorrect setting of electric generators can also be a problem on shootings. They should be properly isolated or moved to a suitable and remote spot. On filming locations, we can often come across disruptive factors such as refrigerators, air-conditioners, vents, the buzzing of lights, etc. If possible, we arrange for them to be shut down during the time of filming.

For dialogue recording in film, we use different types of microphones, most often boom and lavalier microphones. 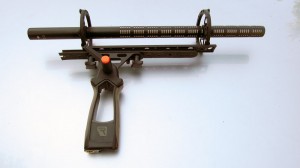 We use a boom when we want to isolate the sound source and record it from a very close range. A basic boom consists of an extendable pole (from 2 to 8 m), a microphone holder, a microphone and a wind shield. The microphone used on a boom is usually directional or highly directional (supercardioid or shotgun microphone). A boom operator manages the boom during filming. His job is to follow the dialogue and action with the boom. He needs to get as close as possible to the sound source and pay attention to many things. He must watch the movement and angle of the camera, so the microphone doesn’t appear in the shot. He must observe the placement of natural and artificial light to avoid having the microphone shadow in the shot. He must stay out of the way of crew members who move with the camera. He must follow the dialogue in order to move the microphone in time. He must follow the instructions of the sound recordist, etc. It’s very important that he gain trust and authority within the filming crew. This will make it easier to reach agreements and compromises with the rest of the crew and hence a better sound recording.

In most cases, we direct the boom upside down perpendicularly on the base. When we follow the performer, we always try to keep the boom in front of the performer’s mouth. This way, we always get equally present and understandable dialogue. In some cases, we can also hold the microphone at an angle and from the bottom, pointing upwards. We can do this when the space is too low or the sound of footsteps is louder than the dialogue. 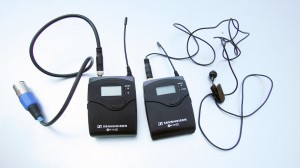 A lavalier microphone mostly has the characteristic of a sphere (omni), which means it is not directional and doesn’t need to be directed towards the source of the sound. Lavalier microphones are gaining popularity and are being increasingly used in wide shots and scenes with a lot of performers, where a boom can’t follow or get close enough. The advantage of a lavalier microphone is the constant movement with the performer without needing a microphone operator. The isolation of the dialogue is another advantage because it is always positioned near the mouth. However, it also has some disadvantages, for example: the sound produced by the actors’ clothes during their movements, wind noise (if the microphone is placed on the outside of clothes), a bad reception or transmission from the wireless system, the use of batteries for the wireless system, setting up the microphone is time consuming, etc. We always position a lavalier microphone as close to the centre of the mouth as possible. This way, we get a minimal difference with the performer’s head movements to the right or left. In some cases, we can place the lavalier microphone behind the performer’s ear or in their hair. This takes more time and coordination with the make-up and costume department.
Sometimes, we can’t make a good recording of the dialogue in a filmed shot due to different reasons. After the end of filming, we can immediately make a so-called wild take. This is a recording of a shot that is only meant for sound recording. In this case, the camera, lights, ventilators, fog machines, etc., are turned off. We make space for the boom operator, who can then get closer to an ideal spot and distance. A shot, acted out only for sound, is recorded. Just in case, we make several recordings, in order to have more options later during the dialogue editing. A wild take allows us to avoid having to do a subsequent voice-over of the shot.

We can use one or more microphones to record atmospheres. When we are recording with several microphones, we use different microphone techniques. For example: AB, MS, Double MS… Individual microphone techniques differ according to the microphone positions and their characteristics.  In order to record an atmosphere, we must first find a suitable location. We record away from the film crew because the crew makes unwanted sounds. We must pay attention to other disruptive sounds that are not a part of the atmosphere we wish to record. The recordings of atmospheres are usually 5 minutes long but can also last several hours. A longer recording can give us interesting, unexpected changes in the atmosphere, which we can later cut out or use in sound editing. We always organise and mark all the recordings accordingly for later use. The recorded atmospheres are mostly organised in libraries, where they are stored for future use in different projects.

Synchronised sounds are sounds created by actors’ movements or are the consequence of actors’ movements (we also call them foleys after the sound effect artist Jack Donovan Foley). Examples of such sounds are footsteps, noise and movement of clothes, touching of skin, sitting down and standing up, movements of different objects, etc.  When we are filming on location, the sound recording is always directed towards the recording of dialogue. As a result, other sounds are less captured and consequently less audible. To make a convincing final sound image, we need to additionally record synchronous sounds. The additional recording takes place in special studios with access to many props and costumes. A feature of these studios is also the floor, which simulates different surfaces for footsteps. For example: parquet, concrete, linoleum, tiles, sand, earth, grass, etc. Synchronised sounds must be very convincing, in order to fit well with the existing recorded sound. We can achieve this with the right choice of surface or prop but most important is the performing of sounds. Synchronised sounds are made by a foley artist (sound effect artist). The task is to follow the gestures and personality of the actor with a correct interpretation of the sound. The artist must also synchronise his performance with the image. Synchronised sounds are divided into several groups: footsteps, clothes, objects and skin.

Music is mostly non-diegetic (see chapter about film and sound editing). It can also be diegetic if it is a part of the action in a certain scene.

If music isn’t essential for the action, played out by actors, it’s added later during the editing.

If we are recording music as a part of the scene, we must pay attention to several things. This music is also called a playback. It is mostly used when shooting music videos or songs in a film. For a playback, we always need a sound player and suitable sound-system. This allows the actors to hear the music well, which is important for their acting or singing. We also record the played music. This helps us later during the image and sound editing. We always record it with the microphone from the sound-system and directly as a signal from the sound player. In case there is any dialogue during a playback, we must lower the volume of the music to a point where it doesn’t disturb the dialogue but we can still hear it. Actors must also adjust the volume of the dialogue to the subsequent actual volume of the music. If we are for example recording a dialogue in a club with very loud music, the music will be quieter while shooting. The actors must pretend that the music is very loud and adjust the volume of their performance. It’s also important to have regulated copyrights in advance for such music. Unregulated copyrights can compromise the whole scene and we might be forced to make a difficult compromise.